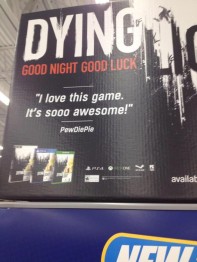 If one image could launch thousands of angry voices across the gaming community then it’s a picture of a promotional billboard using Felix Kjellberg, better known as PewDiePie, as a source for citation. Dying Light, the latest videogame from Techland released under the banner of Youtube’s most prominent uploader and has since come under enormous scrutiny from critics and public alike. Here is why this has nothing to do with Kjellberg and everything to do with Techland.

Companies in any field regularly pay for advertisements. It’s a given at this point that in order to optimally promote a product, you need an external source to use as recommendation, preferably one that has a large following that will guarantee decent sales. Techland may have reportedly (and it seems incredibly likely) paid Kjellberg in some capacity to play the game on his channel and therefore promote it through the incredible amount of followers that hang on his every word. The incentive therefore is for a highly popular Youtuber to play a videogame under the supposedly mutualistic understanding that both parties gain something. That is true to a degree, but the sway and slant of the incentive is massively propped to the side of Techland. Kjellberg does not need this game in order to remain relevant and he presumably doesn’t need to be paid to play the game; any game would suffice in the sense that people would watch him play Flappy Bird for days at a time. So, the message is that Techland are paying a prominent member of the online community to then use something he said during a ‘Let’s Play’ to massively increase their income revenue. It’s a shady, slippery slope when you think about the message it sends.

What’s perhaps worse is the idea that they’ve paid for an endorsement and not revealed that they paid for the advertisement that led to it in the first place. That’s a huge ethical issue for any industry and for all the outrage about using a ‘non-legitimate gaming source’ for a quote or using Kjellberg’s name to sell more copies of Dying Light, it’s the inherent ambiguity around their involvement in staging the advertisement through Kjellberg that undermines their entire effort in making this videogame. Your endorsements have to be unbiased. It’s an ethical standard that most outlets would claim to adhere to, whether the case or not. You cannot in this industry use your own resources to ensure that the viability of your product is undoubted. If the industry is to be taken more seriously than it already is then you cannot defecate all over the intrinsic ethical values that any notable industry should be held accountable to. Not just is it a violation of trust between publisher and consumer, but it sets the whole gaming sphere back a notch, especially considering the recent furores surrounding ethical attitudes via the backwater proponents of #GamerGate.

On a side note, it is interesting that those spewing vitriol at female journalists like Brianna Wu and Anita Sarkeesian deem this issue less important despite this being an actual factual problem as opposed to a make-believe one, designed as a vague filter over obvious sexist intentions.

Techland are at fault naturally, but it is interesting the reaction we’ve seen regarding the quote itself. Kjellberg is no journalist but he is as much a part of the gaming fabric as anyone else, reviewer, critic, developer or otherwise. In many ways he is a figurehead of the gaming community given the impact he’s had on it. So to use a quote he’s made regarding a specific title is perfectly justifiable as long as the quote doesn’t derive from a similar situation as mentioned. If he chooses to play a game of his own volition then it’s understandable to use the quote in marketing terms; it would be a huge boon for any company looking to promote their work. After all, he has the sway of millions of desperately attached teenagers around the world. He is a gigantic source for the general public to engage with and occupies a space where what he says is valid under the context of where we get our information from. He is doing nothing wrong by making statements regarding a game, because he is not a member of the gaming journalism family and as such has no obligation to remain objective with his views or even for that matter to care whether he’s getting paid for a quotation. It’s the obligation of the company in Techland to inform their audience that this statement has been paid for, because it’s their responsibility as the makers of Dying Light to clarify the relationship between an overwhelmingly positive endorsement, the fact that it comes from a purchased advertisement and that they are obviously coercing people into buying a product unethically.

To all those complaining about PewDiePie commenting on a game he may have been paid to play, you’ve missed the point. To all those arguing that his comments dictate the decline of gaming journalism as we know it, you’ve even further missed the point. This is much less about Kjellberg and much more about gaming company ethics. Techland are a company with a direct link to the product whereas by all means Kjellberg is a superstar Youtuber who has no ties to the game and therefore can accept monetary gain to promote a product. He, as an individual not affiliated with the product has that right and whilst some might still call it dubious it’s certainly much lesser of the two evils. Techland bought his services, used his brand and then failed to inform anyone that they essentially bought their own quote in order to better sell their game. This is a really dodgy practice that we need to get rid of before it escalates into anything that seriously damages the integrity of the industry at large.