Walking through South Park’s quiet little mountain town, it’s notable that everything you’ve ever grown up watching on the television has been crammed onto the screen for us to indulge. From Al Gore’s schizophrenic Man-Bear Pig to the Goth kids’ battles with conformity, South Park: The Stick of Truth aims and succeeds in bringing the best of the show forward and giving us the ability to interact personally with them. It’s incredibly difficult to criticise a game that wants to be derivative in terms of a lot of its own content when the majority of that content makes for a fantastic adaptation between television and videogaming. While the collaborative effort between Matt Stone, Trey Parker and Ubisoft does have some issues with blandness of combat and extreme simplicity of difficulty level, the sheer joy that it will bring to so many fans and non-fans alike is undoubtedly a massive achievement and not one to be scoffed at any time soon.

South Park:The Stick of Truth begins with your character, memorably named Sir Douchebag by one Eric Cartman, moving to South Park under mysterious circumstances. Your parents frequently mention special gifts yet you yourself never question them; seeing as how you’re entirely mute you can’t anyway. Forced to go outside, make friends and become a little cooler you stumble across Cartman, Butters and co. waging war upon Kyle and Stan’s Elven faction, which has supposedly stolen the stick of truth, a weapon that allows the wielder to control the universe. What ensues is a bid to reclaim the stick, all whilst having to deal with an alien abduction, the abortion of Randy Marsh’s fake child and Nazi zombies. It’s a mouth-watering adventure that serves to highlight the best of the TV series whilst still carving out a decent enough story to keep up hooked until the very end when, unsurprisingly, things get utterly ridiculous. 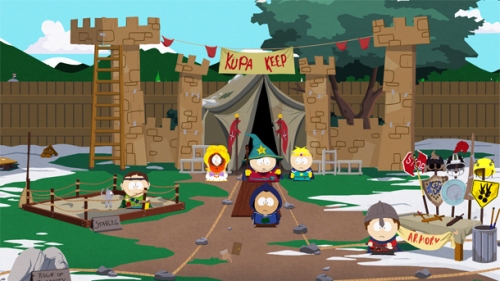 Unlike television, videogames don’t necessarily allow for the greatest progression of multiple characters. Such as it is, many of the kids of South Park get relegated to somewhat secondary status. Kyle and Stan for example no longer claim centre-piece on Matt and Trey’s mantelpiece but just serve to enable story progression. The outrageous moments of humour therefore inevitably fall to Cartman, who becomes a somewhat useless mentor along the path to enlightenment. Many see him as the focal point of the show anyway and it does make sense to use him centrally given how he espouses sharp wit and crude jokes on a regular basis. However, for all your interaction with Cartman, it is a mixture of Jimmy and Randy Marsh who completely own their respective time on screen. Jimmy’s charm and wordplay make him a suitable addition to the crew, whereas Randy seems to pop up at every moment to reinforce the in-joke of him having to endure various painful insertions by foreign objects.

However, while the humour projected out of the mouths of various people throughout the game is largely amusing, there is no new, underlying social commentary to be found here. That may seem a little incongruous given the simplicity of the story, but it is largely what allows South Park to stand out amidst other similar shows. For many people, this will be a little disappointing and there can be a limit to the amount of times one is exposed to the same fart joke. Nevertheless, it isn’t an enduring slight against the game seeing as how so many elements work and the coherency of the story is such that anything extra might be deemed excess fluff. 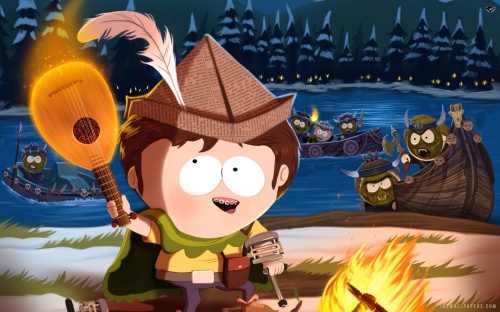 The Stick of Truth relies heavily on simple gameplay to establish itself as a solid, if somewhat repetitive role-playing game. It utilises a fairly standard method of attacking enemies. Your character, Sir Douchebag, will have access to a ranged, melee or magic attack dependent on the class: Warrior, Mage, Thief or Jew. Whilst all four of these classes involve the potential to use both ranged and melee attacks they are separated by the different types of magic one can use. I played primarily as a warrior and had the option to ‘ball-sack kick’ an opponent to gross him out for extra damage, charge an opponent to destroy their armour or simply inflict a straight baseball bat shot to the face. Each class inflicts different damage based on their type but largely they remain the same in terms of using specific power points to do large, often crowd control based aggression. You also possess the ability to fart on an opponent in four different manners that do massive damage. This type of combat is not overly inspired and is rather derivative of most RPG games, but it fits in well enough to the nature of the game.

Where the combat does improve however is in both defence and use of a companion. Defence is largely skill-based which is a nice change from the formulaic nature of attacking. An enemy can also use melee, ranged or special attacks dependent on who they are and your role in preventing your own demise is to block at the opportune moments. It’s a really clever idea despite it seeming a touch underwhelming on paper. Even if you’re not overly enamoured with Sir Douchebag’s role in fights however, companions have a whole host of special attacks that are some of the most flamboyant and brilliantly over-the-top known to any videogame. Particularly impressive are Butters’ Professor Chaos’ random attacks in which he takes the form of everyone’s favourite secret villain in Anime-drawn style, dealing out mass damage. Even more splendid to see is Kenny’s Unicorn attack where a beautiful, white-maned creature comes hurdling over hill and dale, picking him up and obliterating everyone in a line. Of course, given that this is Kenny we’re talking about he can always succumb to his own death, the unicorn occasionally spearing him through the gut and killing him instantly. 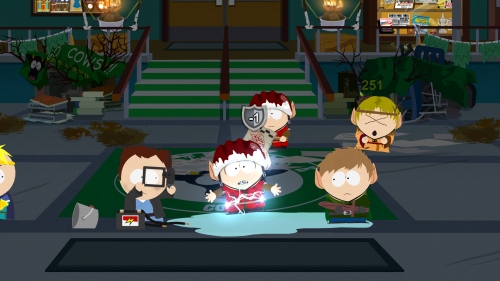 Having the optimal weapon or piece of equipment does increase your chances of success in The Stick of Truth, moreso than most games. Perhaps this makes it a touch on the easy side when fighting but finding an Alien Probe to wack an enemy on the head with is most welcome and modifying it with a host of abilities makes crafting an intriguing prospect. This also lends to the idea of collectibles throughout South Park. Alongside trying to collect all the equipment, there’s also a nice touch in giving the player the opportunity to find and collect all the ‘Chinpokomon’ on the map, in reference to the infamous Pokemon related South Park episode of Season 3.

Talking of using the map to collect these various additional extras, Trey and Matt have done a wonderful job in piecing together the stores, houses and places of interest to create a complete South Park for the very first time. It never feels as if somewhere has been stuck next to another for quest points but feels very much like you’d expect. Eclipsing all else  may be their incorporation of Canada into the storyline and, in particular, as a location. Walking past the strict Canadian border control that requires you to *gasp* own a passport, you enter an entirely 8-bit pixelated frozen land where the people are overly friendly and the lands are inhabited by deadly wildlife. Not only is it gorgeous but provides a welcome break to intersect the typical graphics of the game, which are naturally identical to the television show. 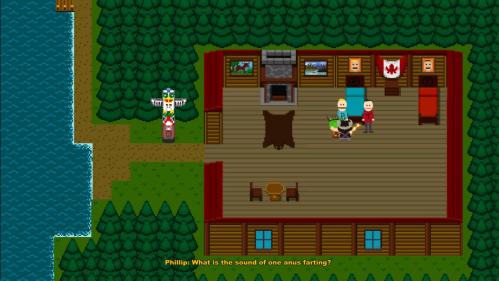 Despite the autocratic censorship, South Park: The Stick of Truth is a compact poop nugget that’s as valuable as any gem. It’s crass, crude and downright dirty at points, and though it doesn’t necessarily allow any allegory to flow in-and-out of the game and can certainly be deemed too easy for experienced RPG players, there’s so much to do and see that it really is as close to perfection for a licensed videogame.

Much like Sir Douchebag’s adventures inside Mr. Slave’s derrière, we’re plunged into a world full of crassness and crudity. Unlike the inside of Mr Slave’s behind though, there’s so much fun here that you’ll want to stick around for days.

Plus, Cartman has an endless supply of Cheesy Poofs. God damn those overly-addictive corn based snacks.