Wandering amidst the snowy peaks and the barren desert plains, fighting dragons, demons and collecting far too much elfroot, Dragon Age: Inquisition cannot be reprimanded for its behemothic scale and size. Nevertheless, this proponent of the game lends itself to the somewhat clichéd, antiquated saying of ‘size isn’t everything’. Where normally this phrase follows the rudimentary, crass attempts of a 14-year-old’s toilet humour it could be quite indicative of the problems that this game both faces and poses. Bioware have indeed sewn up and merged the gameplay fabrics of Dragon Age: Origins and Dragon Age 2 and made a quite monumental attempt to reduce the repetitive, recycled environments, but, where previous titles had issues they still remained a thriving hub of activity and never felt distant and unattached. Inquisition might make up for Bioware’s previous mishaps but there is an ominous, lurking feeling of vacuity. That is to say that despite Dragon Age: Inquisition’s quite improbable size it doesn’t feel full of anything at all, rather, empty unnatural spaces that detract from the naturalness that should be emanating from every fibre and every corner of the map.

Dragon Age: Inquisition is the third game in the series of games by developer Bioware. They focus primarily on the lands of Ferelden and Orlais. Where Ferelden is a melting pot of different ethnicities and down-and-outs trying to make something of their lives in equally honest and scrupulous fashion, Orlais is a rich man’s paradise, where all that matters is reputation and money under the guise of a Renaissance Italy fashioned masquerade ball. Inquisition sees the Divine of these lands, a certified fictional female Pope, murdered seemingly inexplicably at a summit attempting to reconcile many of the factions of the world. The Inquisitor, or occasionally Herald of Andraste, is our protagonist, he or she, dependant on your pre-game choices, being the only surviving member of the summit and now in possession of a strange glowing green hand that can close the rifts in time and space that are bringing in demons and all manner of weird monstrous things. A bit complicated? Well, admittedly, it’s an overbearing burden for a new player unaccustomed to the often intensely conceptualised story boards of Bioware. However, what starts off as tricky soon becomes quite understandable once you set off into the sunset with companions in toe. 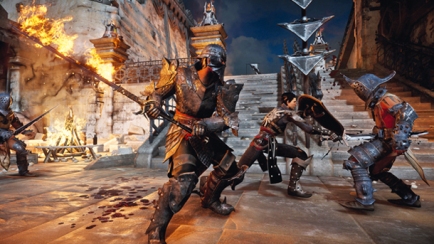 Commendably, Bioware have gone back to their roots with gameplay mechanics and thankfully so. This was likely conceived as a much more tactical based RPG than another staple franchise of theirs, Mass Effect, so it’s good to be given the option of different mechanical options. You can now play in real-time in typical third-person action adventure style, or you can pause the game and design your attacks based around a top-down view of the map and enemy locations. Moreover it’s possible to combine the two together to grasp a firmer hand around the somewhat dubious actions of your fellow, playable companions who unfortunately still do desperately frustrating things in real-time fighting like run into the giant orange fireball spat out by a nearby towering dragon. The willingness to cater to two types of player is certainly an admirable quality though and, despite the occasional glitch or malfunction, the system, for the most part, works really quite well.

In order to make the most of the gameplay mechanics, it’s practical to possess an invaluable and logical skill-tree and inventory system. One of Dragon Age’s strengths has always been that the inventory system never feels like a long slog through the gloopy waters of customisation. This time around the inventory system thrives under the tutelage of a fantastically designed way of combining different bits and bobs to make super weapons capable of destroying even the most deadly of foes. You can use all the materials that you gather in the wild to create weapons and armour that can be specifically catered to your next boss-level opponent. For example, if you know that you’ll be taking on a dragon with a weakness to frost and an invulnerability to fire, then you can make weapons that possess extra frost damage and armour that has resistance to the flames.

Using these tactics against high level opponents is quite satisfying, all the more so because the graphics have seen a substantial upgrade. The Xbox 360 does sometimes struggle and lurch under the weight of the improvements but on Xbox One this is truly a gorgeous looking title. On a superficial level, there isn’t much which is off-putting or contradictory to the level that Bioware have set themselves. Wildlife acts and reacts naturally dependant on the player’s motivations, the backdrops seem less ‘wooden’ than ever before and the subtle nuances of gusts of winds changing direction when you’re out gallivanting in arid deserts is highly appropriate. Unfortunately, the same can’t be said of the facial and character animation which is stilted and sometimes so outlandishly perplexing that it begs belief. All too often an open mouth will belie the true intentions of what a character is trying to say by remaining open for the duration of a dialogue. It’s a shame because everything else thrives under the current game engine.

Where the graphics obviously work however, the space that they make up does not. To many that comment may seem somewhat extraneous but it’s a valid concern that has been growing ever since my completion of Inquisition. The world is monumental in scope and is aghast with realness but after the initial glazing of immersion there comes a point when you realise that the grandiosity of the world is subverted and left meaningless because of the soulless vacuity that derives from just the blandest of journeys. Put simply, there reaches a point when the veneer is lifted and all you’re left with is a map full of the ‘unfilling’. No longer is a map a bastion of poignancy and elemental beauty but simply a field designed to take you from one depressingly unappealing point of interest to another. Perhaps this is indicative of more than just Dragon Age: Inquisition, or maybe I’m being too harsh on an otherwise good game, but when you come away from any videogame feeling physically drained, and not for the right reasons then terms like ‘soulless’ and ‘draining’ seem applicable. This builds up to the point where the game becomes a battle for survival; Inquisition, however, no longer remains a battle for survival in the sense of keeping your character alive, but an internal battle to make it to the end of the game.

Fortunately Bioware has an arsenal of personable characters to inhabit the world and make it less bland, right? Right? When you have playable and interactive characters, then it’s inevitably a subjective affair, yet it cannot be denied that this bunch of miscreants accompanying The Inquisitor was a disappointing bunch. They simply had none of the appeal of previous games – with the odd exception – and returning characters like everyone’s favourite sarcastically-inclined dwarf felt criminally underplayed and undervalued. There was no favourite character. They were either frustratingly annoying (Vivienne), not relatable enough, even relatively, (Cole/Solas) or simply too bland and/or archetypal. Admittedly, Sera, did bring some much needed brilliant idiocy through her antics but caring about one character out of the dozen is criminal. It’s all well and good to implement a diverse bunch of races and sexes but unless you allow them interesting personalities to fill the world with then it’s incredibly disappointing given that many people will play with relationships as their primary agenda.

The question therefore becomes one of balancing out these positives and negatives. Does a lacking side-army of friends and foes, and a sense of hollowness throughout the game, counter-act the drastic improvements to graphics and gameplay mechanics. Well, ultimately no. This is not a bad game, just one that I find myself pontificating over its overall value. Dragon Age: Inquisition is by no means an outright classic – it has far too many overriding issues for that – however it certainly provides much enjoyment through the world Inquisition resides in and its occasional dip into gesticulative political attempts.

Whilst Dragon Age: Inquisition doesn’t reach the heady heights of Dragon Age: Origins it is definitely a worthwhile addition to a franchise that continues to enrapture anyone with a propensity for an almost perpetual fantastical adventure.